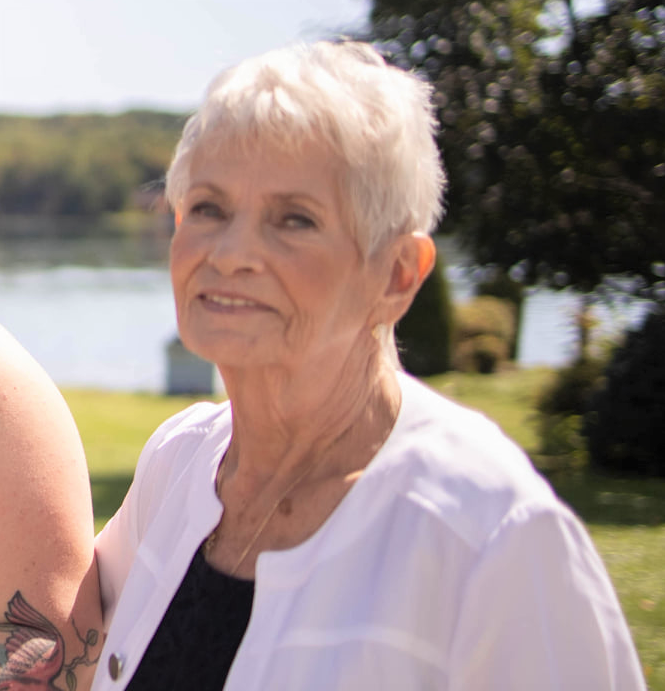 Deanna Dalla-Vicenza has been a part of St. Vincent Place since the beginning. She was part of the group of volunteers who scrubbed and painted the food bank and soup kitchen to prepare the building for opening as a newly-minted charity. She’s volunteered on the front lines in the food bank and soup kitchen, and even in the thrift store, back when it was located at the former Blessed Sacrament Church. And she has been an important member of the Board of Directors for many years.

St. Vincent Place is so grateful to Deanna for her years of dedication to the organization, so it’s an understatement to say that she will be missed, with her retirement from the Board this year.

Deanna is known for several things around St. Vincent Place. Food bank coordinator Fran Barker remembers her most fondly for her generosity.

“I have known Deanna for many years, before St. Vincent’s,” said Fran. “Deanna has an extremely generous heart. She was a team captain at the soup kitchen where we worked together with Jane McNally and friends. She supplied the ingredients to cook so many good meals – no one went hungry if Dee was cooking! She also bought us all aprons with our names on them!”

“In the food bank, we would place donated baking items directly into the freezers with paper wraps and plastics that cracked with freezing temperatures,” remembers Paul. “Deanna proclaimed that there was no point in placing baked items unprotected from the elements. From that day on, flexible plastic bags of all sizes were available. To this day, we still use her suggestion.”

Board treasurer Mike Barker also has fond memories of working alongside Deanna, from bagging food bank packages together to sitting on the board. Mike believes that Deanna’s commitment, energy, and business experience were major assets to the St. Vincent Place Board.

“We could always count on her to speak her mind and give the Board good advice,” said Mike. “Being on the opposite side of an issue to her was sometimes a scary business as she stated her position in, shall I say, a ‘vigorous’ manner. She was feisty – but reasonable. And her strong positions came from a deep commitment to the Vincentian values and principles we all subscribe to.”

Indeed, it is Deanna’s ability to speak her mind and stick to her guns for which she is most known, at least as a Board member.

Board Chair Vince LaRue said that in everything, Deanna always had the best interests of St. Vincent Place as a priority.

“I liked as a member of the Board she was not afraid to disagree with an issue that the majority of the Board thought was okay,” he said. “She always gave her reasons why she disagreed. This helped our Board arrive at many decisions that helped better St. Vincent Place.”

Fellow director Betty van Kerkhof said of Deanna, “I will remember her as passionate – spirited and very committed to fundraising. She is also not afraid to challenge assumptions or the status quo.” Similarly, director Dan Puddister said, “Deanna always had an opinion that was grounded in her experiences that resulted in sound advice to SVP. Her insights will be missed.”

For many years, Deanna acted as chair of the Board’s fundraising committee. In fact, it was Deanna who brought to St. Vincent Place the idea for the Big Blue Box Food Drive, one of the organization’s two major annual fundraising events. Now in its eleventh year, the Big Blue has brought in over $300,000 worth of food for the food bank. Vince said that the introduction of the event helped turn the corner on money issues St. Vincent Place had been experiencing at the time.

As an organization guided by the principles of the Society of St. Vincent de Paul, each Board meeting opens with a “Prayer for Guidance and Wisdom.” St. Vincent Place General Manager Nat Cicchelli said that one section of that prayer always reminds him of Deanna:

May we be wise in our discernment,
Balanced in our judgement,
Fair in our decisions,
And visionary in our planning.

“Thank you, Deanna, for your guidance, work ethic, and vision in making St. Vincent Place what it is today,” said Nat. “You will be missed.”

Please note that our offices will be closed on July 1, reopening as usual on Monday, July 4.

The food bank and soup kitchen will open as usual on Saturday, July 2.

We wish everyone a pleasant long weekend!

Thank you to RM Moore - the students who won the pizza party opted to donate the pizza they won back to St. Vincent Place! And thank you to Tazzi’s Cafè & Restaurant for providing that pizza!